I’m proud to announce the publication of my second book of poetry which is now available for purchase :

“For Every Heart That Beats” by Allison Ryder 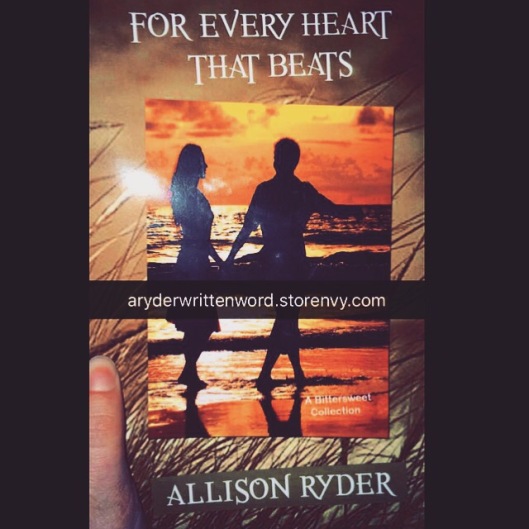 his hands tremble with PTSD, anxiety,
nervousness, anxiousness-
their rhythm could break a glass,
sometimes he cannot even hold a cup off coffee,
unless gripping it with both hands.
his skills are impaired. frustrated tears
stream down his face;
unable to express the difficulties he faces,
not knowing the root of this pain,
not knowing why he can’t stop shaking,
unable to accept that he can’t control it.
his body is turning on him,
whatever this is, it’s winning.
and now it’s intervening, interfering –
typing becomes a struggle
when his fingers are shaking,
when his forearm is twitching,
and his elbow has shoots of pain,
right in the connector.
he hides the shakes, hides the pain
as it starts to consume him.
whatever this is, it’s winning.

if i write about heartbreak, i’m sulking at home mourning the loss of love
if i write about love, i must be wed.
if i write about depression, pain, sickness, i must be dying or cutting myself, dead.
if i write about two girls kissing, i must be gay.
if i write about sex with a man, i must be straight today.
if i write about anger, i must’ve had a fight and been talking about you.
and then they have the audacity to claim you’re publicly diminishing them in poetry.
if it’s not facebook official, you must not be in love.
if it’s on instagram, it must be true.
if it’s a quote – it must be how you feel, must be what’s happening.
some don’t seek other’s approval – don’t care for other’s perception,
some artists just write.
i’m writing stories, now you think you know me.
the accusations and judgments are getting old.
i don’t write nonfiction. you’ll never know me,
my story will never be told.

once she was thirteen years old
and her life was set, the boy of her dreams
would be her first love, her first, her first lesson.
by the time she was twenty one,
she was burned, broken, belittled,
but still held that love and deemed it a blessing.
it wasn’t.
once she was twenty two years old,
watching life unfold but on a determined road
to get a college degree but it came with a choice,
there’s a price for that hard work, a price
to be that free.
then she had dreams that weren’t meant for sleeping,
work had come and go but that artist mentality was who she was.
love came and went, none for the keeping but
then, she had fallen in love and everything erased,
it became the first time all over again,
but for the first time. let go with a painful kiss
because another held his heart over his mind.
then sickness fell upon her, and for the first time
her hope turned everything black and white,
color was hard to find when they told her
finality would inevitable end this fight.
then it was three years later, still making art,
trying to make a change. the path she drew for herself
not taken, plans diverted, the absence of what she wanted
but then, she found love where love didn’t find her.
she lost so many friends along the way and found some
she would lose her life for. fight for.
even in their absence, she would lay her life down for them
because without them, something broke, something tore.
that love changed her and lingered but she found love again.
yes, for the last time. she opened up a distrustful and broken heart,
she found a mutual future until winter swept in, froze her future
until they broke apart.
soon the future will be here, will she be settled and comfortable,
alone because she can’t get close to anyone,
broken because those friends were better at being gone
then she was at getting them to stay,
keeping family close but also at bay,
dedicated to her voice being spoken through art,
would her future find the missing piece
to a tired heart? would her future get her closer
to everything she wants or would she have what she needs,
mask it for want, and still feel completely empty,
comfortable in the silence because at least there,
it made sense why she felt so alone. 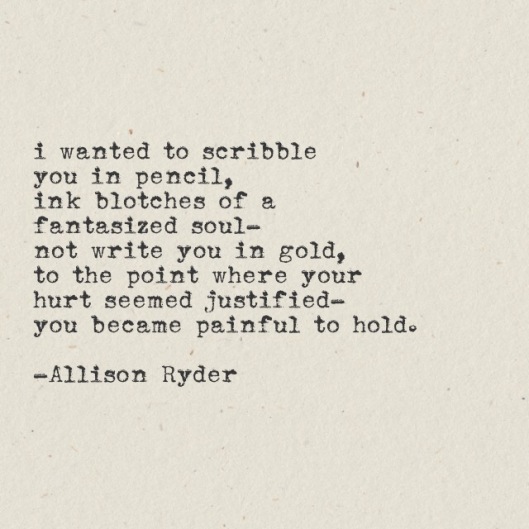 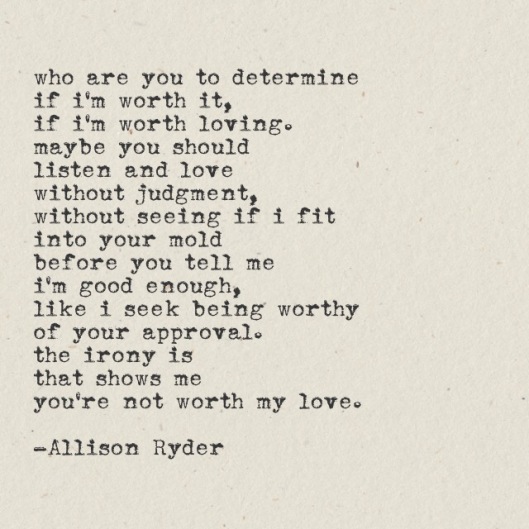 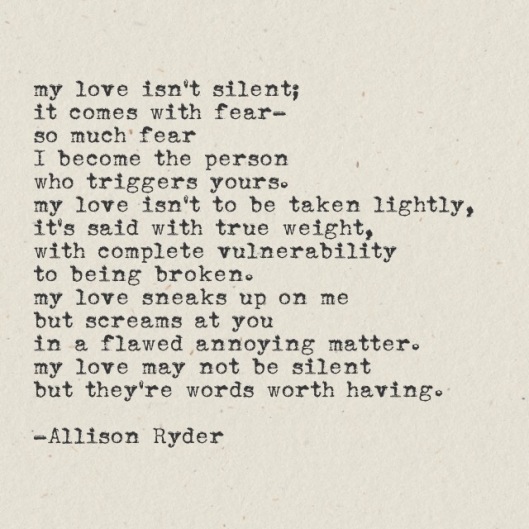 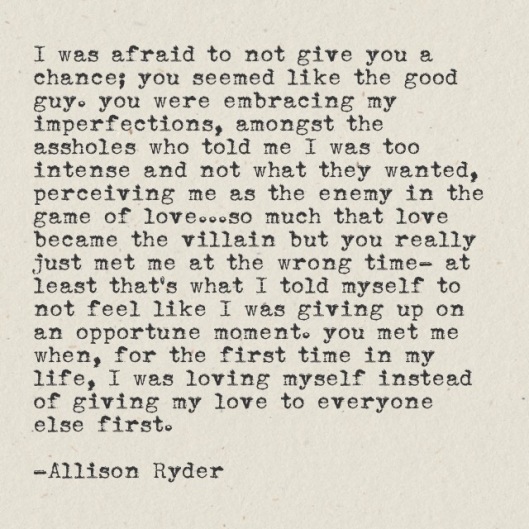