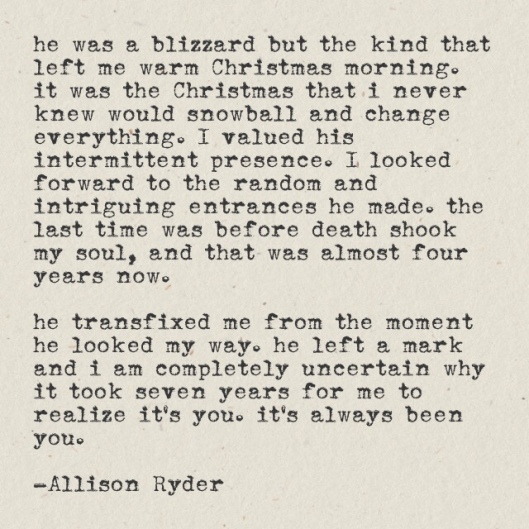 my new motto for everyone I know is you get what you give because my son deserves all of me so I cannot go around giving to people who do not deserve an ounce from me; not my attention, energy, or arguments. -AR

I distinctly remember you putting on a show in the car and me gazing at you with a stupid smile on my face. you would notice my focus of attention and ask what I was staring at. But you knew and I knew, and yet, a million verses of poetry would spin through my mind but you paralyzed me. Falling for you was like bungee jumping and remaining suspended in air. You were only interested in the kind of bungee jumping you could run away from, not stay free falling with. You were interested in crumpling bedsheets under moonlight and being home by sunlight. You weren’t interested in my cups of coffee over warm conversation, much less my heart. And yet, falling for you was as easy as breathing, even though I knew all of these things. Because despite these things, you captured me in a way I didn’t intend to be caught.

To every woman who was ever told she was “too much…”

I hear this so often. She was just too much. ‘What was too much? In what ways?’ She was intense. She loved immensely. She asked too many questions. She cared too much. Past lovers told her she was too much so something is wrong with her.’

Ah. I understand. So you prefer mediocrity, someone who doesn’t care to check up on you, or build you up, or help you achieve your goals. You want someone who loves you less, who doesn’t ask questions to make sure you’re alright, to start a conversation, to take an interest in the things that interest you. Have I gotten that right? Oh, and then to top it off, you took something she told you in confidence, revealing weakness, insecurity, and vulnerability, and you used it against her to validate all the reasons she wasn’t good enough for you. The truth is, her “too much” is a rarity – it’s genuine, unconditional love and support. She’s someone who will go out of her way to ensure you’re taken care of and attempt to help you achieve every dream and goal. the truth is, she asks questions because she gives a damn, not because she wants to control you or the situation, but because she wants to be included. she wants to feel important. and you failed so terribly at that. you made her feel inadequate and not worthy of the one persons love, she was killing herself to have. you made her feel like she was trapped inside of herself, you made her hate herself. you made her question why she wasn’t worth it when you chose to pursue what she wanted with you, with other women. she’s not too much, you’re just too small minded. she wants a great, no regrets, beautifully imperfect love. that woman who’s “too much,” she is the top of the pedestal that you can only wish to climb one day. so to all you women, who have ever been told you’re “too much,” i know how much you wanted their love, how hard you worked, how much you tried but don’t ever feel undeserving or insignificant because you’re the reason great love exists.

and I can promise you, one day they’ll realize they lost everything because they were too weak to leave their comfort zones and have “too much.” instead they’ll be stuck with not enough.

one day they’re going to choose someone else and it’s gonna hurt a lot less because you’ll realize there’s nothing wrong with you. they were just too afraid to love and let themselves be loved by someone who was the real thing.

I only became a storm, to try to extinguish your flames.

you set my world on fire in a way that exploded mediocracy. in such a way that burned every inch of me to pieces in your departure. I’ve never known a love that took parts of me with it once it was gone, parts scorched with no chance of recovery.

we sat for awhile and pondered the wreckage of the soul. we dove into the broken hearted and what makes us make the tedious decisions leading into failure and pain. we reflected on how we got to the position we now stood, surrounded by lust and yet feeling alone, trying to block out the noise and running into abandonment to avoid commitment. it’s a slippery slope, the road of broken hearts, once you go down, it’s difficult to trust the hands trying to get you back up.

Visit my storefront today to purchase your copy of my second published collection of poetry. As fantasy clashes with reality, this book takes you on an intricate and emotional rollercoaster of love and tragedy, lust and heartbreak, with subject matter all ages can relate to. 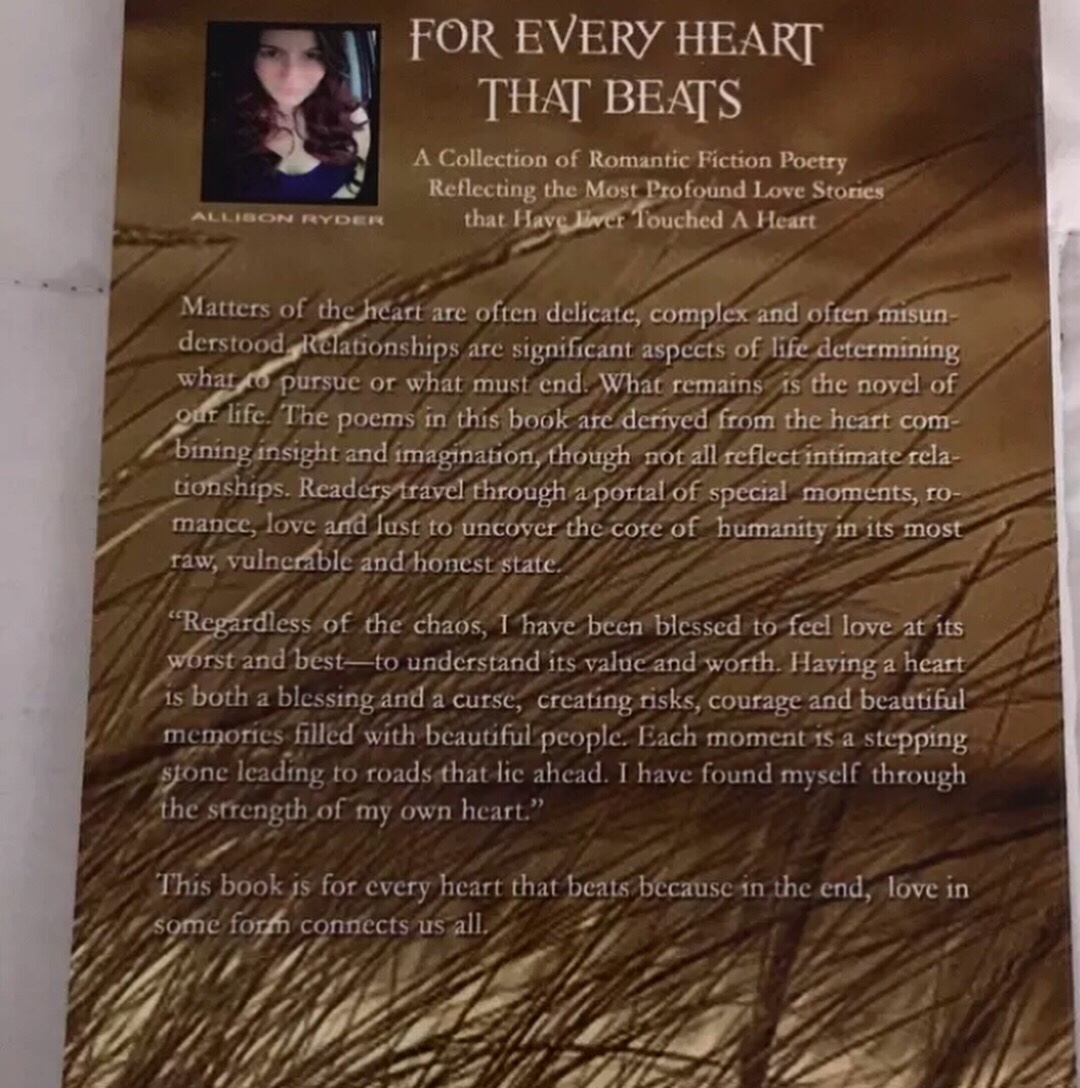 i never realized that you emotionally tortured me to the point where the only light i had was a dim shadow absorbed by dancing silhouettes. i made an epic love story, a captivating ballad out of your treacherous symphony. i do that sometimes. see the beauty in scars to override the ugly acts that carved them.
-Allison Ryder

i never realized that you emotionally tortured me to the point where the only light i had was a dim shadow absorbed by dancing silhouettes. i made an epic love story ballad out of your treacherous symphony. i do that sometimes. see the beauty in scars to override the ugly acts that carved them.
-Allison Ryder